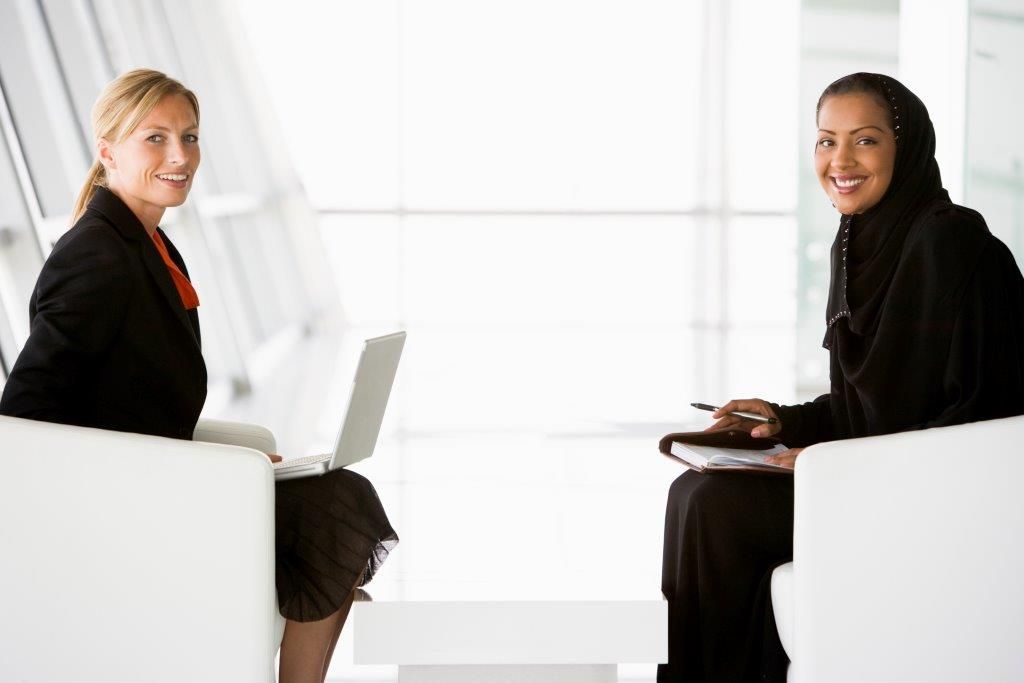 They represent 50 percent of the population. They represent more than half of all graduates in many Arab countries. They sit in high positions, in governments, parliaments and courts. One thing is clear: The economic cooperation between Germany and the Arab countries must take women into account!

The promotion of the economic and social participation of women in the Arab world and the intensification of exchanges with German decision-makers are more  important than ever  for the EMA. After the great successes in recent years, it is therefore a great pleasure for us to invite you :

This year, the forum will be opened by Dr. Maria Flachsbarth, State Secretary in the Federal Ministry for Economic Cooperation and Development, Caren Marks, State Secretary in the Federal Ministry for Family Affairs, Senior Citizens, Women and Youth (tbc) and H.E. Sheikha Hend Bint Faisal Al Qassemi, owner and publisher of the Velvet Magazine and organizer of the International Dubai Fashion Week, as well as by the President of the EMA, Gabriele Groneberg, Former Member of the German Bundestag.

“The EMA is doing an excellent job, because it opens the space for cooperation between German and Arab women entrepreneurs,” sayed Nouzha Skalli, Moroccan Member of Parliament and Former Minister for Family and Women, based on her own experience. In the past years, the pioneer of Moroccan women’s politics inspired the audience with her contributions. She has since then become  a permanent and relevant speaker at EMA forums. Together with Sawsan Chebli, the Representative to the Federation of the State of Berlin and Secretary of State for civic engagement and international affairs, she will give one of the keynote speeches this year.

At this year’s German-Arab Women’s Forum, the EMA gathers around 200 entrepreneurs, decision-makers and multipliers from Germany and the Arab world. In several panels on current and exciting topics, this year’s event provides information on German and Arab perspectives on the situation of women in business, society and politics, drawing on the individual careers of the participants.

Thanks to the support of the Federal Ministry for Economic Cooperation and Development, participation is free. Experience has shown that this event will be well attended. Members of the EMA and partner associations are given priority. Please note that participation in the forum is only possible upon submission of the completed application form and subsequent our  confirmation of your participation.

“On behalf of HRH Price Hassan bin Talal, former minister of water and irrigation, Dr. Hazem Al Nasser patronized the events of the 3rd German Arab Energy & Environment Forum at the premises of Amman Chamber of Commerce on Sunday.
The forum, organized by the ACC in collaboration with the Euro-Mediterranean Arab Association, aimed at discussing the scarcity of natural resources mainly water.”
PDF

“Commissioner for the Environment and the Region at the Aqaba Special Economic Zone Authority (ASEZA) Suleiman Njadat on Tuesday, met with a German delegation, specialized in environmental affairs.
The meeting was held aspart the third German-Arab Environment and Energy Forum, which was recently held by the Euro-Mediterranean-Arab Association for Economic Cooperation Amman.”

“The German-Arab Environment & Energy Forum provided a large opportunity for the participants from Jordan and Germany to network, extend their cooperation, and establish new collaboration opportunities.”

“We need more public awareness on green environment as less than 10% of our population understands what green economy means, according to HE Dr. Talal Abu-Ghazaleh, chairman of Talal Abu-Ghazaleh Organization (TAG-Org).
Speaking at the 3rd German Arab Environment and Energy Forum held under the Patronage of HRH Prince El Hassan bin Talal and HE Sigmar Gabriel, former Minister of Foreign Affairs and Vice-Chancellor of Germany and organized by the Euro Mediterranean-Arab Association (EMA) and TAG-Org at Amman Chamber of Commerce […]”

“Deputizing for HRH Prince El Hassan, HE Dr. Hazim El Naser attended the Forum which focuses on Shaping Transition Sustainability and includes field visits to Amman and Aqaba projects regarding energy and water by a high-profile German delegation headed by German Ambassador to Jordan HE Birgitta Seifker-Eberle and EMA’s President Gabriele Groneberg.”
PDF

“The third German-Arab Environment and Energy Forum opened on Sunday at the Amman Chamber of Commerce under the patronage of His Royal Highness Prince El Hassan bin Talal, in the presence of former Minister of Foreign Affairs and Vice-President of the Federal Republic of Germany, Mr. Sigmar Gabriel, and Senator Talal Abu-Ghazaleh.”

Impressed by Germany with its highly developed socio-economic level and its economic progress after World War II, HE Sheikha Hend Bint Faisal Al Quassemi, the guest of honor of the 4th German-Arab Women’s Forum in Berlin, emphasized that: “Only countries with a high degree of tolerance can progress”. Undoubtedly, our guest set an extraordinary example for recognizing different “perspectives on the world”, which was the topic of the first panel of the forum. EMA had invited several hundred participants from companies and associations, from diplomacy and politics, from media, culture and society, to provide information on German and Arab perspectives and the situation of women in business, society and politics.

HE Sheikha Hend took on a connecting role between the panels of the day. During her speech, she summarized the development of her home country, the United Arab Emirates, by referring to the changing role of women in the Emirati economy. Fifty years ago, fishing and pearl diving determined daily life in Dubai and Abu Dhabi. While men had regularly left the country to seek work or earn money elsewhere, Emirati women at home, often under challenging conditions, had led not only their households but their country. They created their entrepreneurial networks and communities, have learned how to be more self-reliant and financially independent and proved themselves to be hard-working and productive actors in the daily economic life.

HE Sheikha Hend inspired with her speech the second panel “lifelong learning.” She highlighted the value and the importance of continuous and well-targeted learning to respond to everyday situations. The body and the mind must always remain in perfect harmony.

Furthermore, the entrepreneur and philanthropist underlined the need for dialogue and cooperation across borders. In her own business, she pursues the motto: “look West, and think East”. A formula implemented by the EMA, which promotes exchange between economies. A work expressly praised HE. Sheikha Hend.

“The future is female”

Dr Maria Flachsbarth, parliamentary state secretary at the Federal ministry for economic cooperation and development (BMZ) commended this core competence of the EMA. With special thanks to the EMA’s activities, she added: “we must promote women’s networking and exchange.” Despite the low employment rates of women in the MENA region, “the future is female”.

However, the EMA demonstrates with the Ouissal Programm, the German-Arab mentoring program funded by the BMZ, that the present is already female. Since 2012, this program has brought together female entrepreneurs from Germany, Tunisia and Morocco and had accomplished much more than just economic progress. Economic and structural support can only be achieved with international understanding and the empowerment of women. Gabriele Groneberg, MdB a.D., president of the EMA, stated in her opening Speech, that “the initially delicate plant Ouissal has gradually become a magnificent tree.” She finally thanked Dr. Flachsbarth, representative of BMZ, for the fruitful cooperation with the Ministry and highlighted the increased visibility and exemplarity of young Tunisian and Moroccan women entrepreneurs through the Ouissal program.

The Ouissal participants demonstrated the versatility and creativity of founders with their pitches and exhibition stands. In dynamic keynote speeches, they presented their successful companies and ambitious strategies. From social engineering and robotics to organically grown olive oil and modern textile industry – all the participants have one thing in common: They create jobs and hope for other young women and men. They are role models, and above all, an essential key driver of economic growth and perspectives in their home countries and beyond.

“Ouissal is unique in its kind. Through intercultural exchange and virtual mentoring across borders both, mentors and mentees can learn much more than in a national or even in-company program. It is the corporation on an equal footing and the realization that we can learn so much from each other and, ultimately, as leaders, face all the similar challenges, what makes Ouissal so special”, explains the initiator and Secretary General of the EMA, Clara Gruitrooy. Therefore, Ouissal always takes mentors from both sides of the Mediterranean, because learning is not a one-way street.

German-Arab perspectives on the World

Whether a women’s quota can contribute to greater participation of women in economic life became the dominant theme in the “Perspectives on the World” panel. Britta Sandberg, head of foreign correspondents at the Spiegel, noted that since 2010, the culture within the editorial desk had dramatically changed. Today, with 42 per cent, more than twice as many women are in management positions, and almost all departments have a dual leadership of men and women. The quota has positively changed the working atmosphere: “At the beginning, I was against increasing women’s quota, because it is the performance that has always counted for me, not a gratuitous position. However, this quota was the best thing that could happen to Spiegel. With the participation of women, areas of interest, the topics of conversations and even the male colleagues’ points of view have changed.”

Ida Beerhalter, the co-chair of the Saudi Arabian investment company IOME and vice-president of the NGO Astia in the USA, supports via Astia only companies with at least one female founder in the team. She stressed as well the importance of education that will enable and promote equal opportunities between the sexes. It is not a question of “competition between men and women, but between those who understand it and those who still need to understand it.” The former Jordanian Industry Minister HE, Maha Al Ali agreed and called further for greater emphasis on reconciling work and family life.

In her keynote address, HE Nouzha Skalli, Morocco’s dedicated Minister of Women Affairs ret., expressed her confidence: “I will fight for gender equality until my last day.” Enormously appreciated words by the audience for a woman who has shown her continuous commitment to the promotion of women in Arab countries!

It is a core objective of the EMA to overcome boundaries, to learn from each other and to point out similarities. The German-Arab network of women entrepreneurs has grown exponentially over the years and thus offered a unique platform for exchange again this year. It is now up to politicians and the private sector to shape the future of this cooperation. The EMA will be at the forefront.