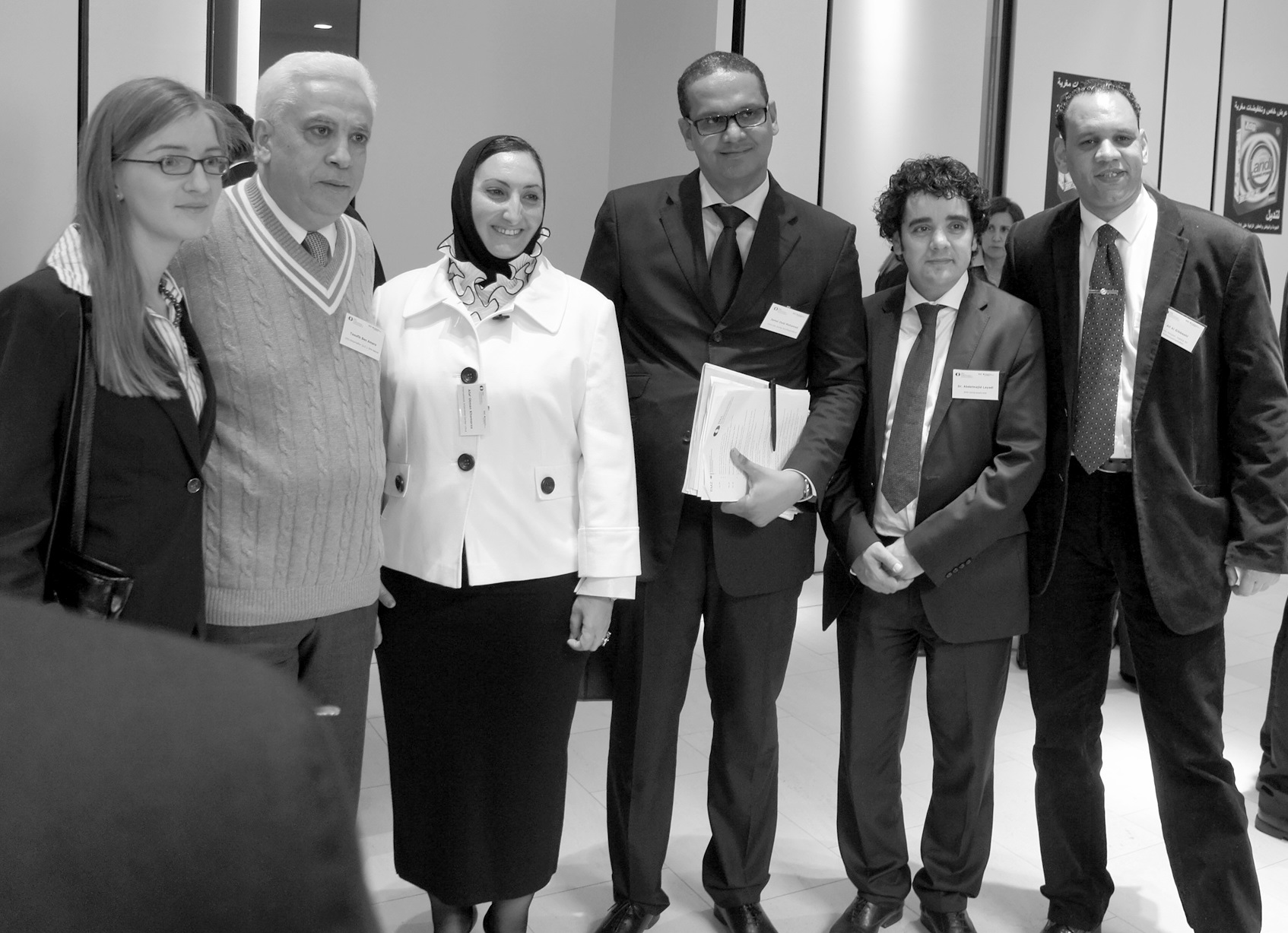 October 19, 2011 | 9.30 – 17.00 h
Under the patronage of the Federal Minister for Economic Cooperation and Development Dirk Niebel
Hamburg state representation in Berlin | Jägerstraße 1-3, 10117 Berlin

The movements in the Arab world bring about many changes. The role of the Arab states to Europe, but also among themselves, will be redefined many times. The question of how the Maghreb region will hold its own economically in this new era and how Germany’s economy will network with the region in the future will be all the more exciting.
In 1989 the “Union du Maghreb Arabe” (Arab Maghreb Union) was founded by five states: In many respects, however, the Maghreb Union remained inactive, not least for political reasons. The region is characterized by common historical and geographical challenges.
For example, the region affected by desertification and suffering from severe water shortages must implement innovative solutions and state-of-the-art technologies in order to enable sustainable, forward-looking economic activity. In addition to environmental technology and renewable energy projects, it is also necessary to further expand organic farming and create structures for sustainable tourism. In order to expand trade with Europe and especially within the Maghreb Union, existing infrastructure projects, such as the Maghreb highway, must be implemented.
For Germany and Europe, strong economic integration of the Maghreb is of utmost interest. Simplified and more transparent trade relations, the creation of jobs in a region with high population growth and trained specialists could reduce the pressure of migration towards Europe and make the region a stable and even more prosperous partner for Europe and the whole of Africa. The extent to which German policy can contribute to implementing this scenario will be discussed, as will the question of what opportunities and risks are available to German entrepreneurs in the Maghreb and to what extent involvement in one of the countries can help to open up the entire region economically in the future.
Such an overarching forum of this kind has never existed in Germany before. With its creative ideas, its unique network and its young dynamics, the EMA is once again creating an interdisciplinary forum for a sustainable, forward-looking exchange of experts and representatives of all sectors from all over Germany and the entire Maghreb.

Under the patronage of the Federal Minister for Economic Cooperation and Development, Dirk Niebel
October 19th, 2011 at the Representation of the Free and Hanseatic City of Hamburg in Berlin

10.30h       Panel I: Political and Legal Framework for Entrepreneurical Activities in the Maghreb Countries

In December 2010 Tunisia became the starting point for a series of events which have been termed “The Arab Spring”. Since the beginning of 2011 protests have spread throughout the EMA-region (North Africa and the Near East) and are now also confronting the Maghreb with major upheavals. Every country in that area has to face individual effects of discontent. However, all of them are challenged with similar problems.

For EMA, one of the main goals aside from fostering trans-regional exchange is the development of cooperation between the Maghreb states. Against this background, EMA held the Maghreb Forum on the 19th of October in Berlin. The Forum offered an ideal platform for representatives from the Maghreb states and for a variety of experts to exchange their views on the future cooperation with the region. Apart from bringing together valued institutional partners and business associates, the Forum was further enhanced by the participation of all of the five ambassadors of the Maghreb. Thereby, the congress proved to be a diplomatic success also.

The political recognition of the event was further heightened by the patronage of the Federal Minister for Economic Cooperation and Development, Dirk Niebel. In his opening address, Mr. Niebel referred to the title of the conference “Germany’s Economy for a Strong Maghreb” and expressed his opinion, that “without economic development there will be no successful transformation. The minister shared the view of EMA-President Prof. Dr. Siedentopf, that economic development is vital for a sustainable development of the region.

Germany’s Economy for a Strong Maghreb

In her address, the Manager of the Forum, Ms. Clara Gruitrooy, stressed the potential of a German-Maghreb-Cooperation for the development of the area. The opening of the Maghreb would be advantageous for Germany. Therefore the interest in further cooperation was strong on both sides. This point was underlined by Abderrachid Ghimouz, the president of the Seybouse chamber of commerce. Mr. Ghimouz described Germany as a valued economic partner in all of the region.

Still, German companies are not as strongly engaged in the region as they could be and possibly should be, remarked Ambassador (ret.) Dr. Ulf-Dieter Klemm. Thus all of the speakers as well as the patron of the Forum himself called on German entrepreneurs to overcome their “shyness to invest”. This appeal was further voiced by Afaf Otman Khamerza of the International Arbitration Centre, who joined the conference from Libya. Ms. Khamerza stressed that now the time had come for German businesses to engage the region. The present situation did not negate past international contracts and the new political system would support the rule of law as the basis for economic cooperation in every possible way. German companies could have a share in the economic recovery and they could contribute to the stability of the region.

Integration of the Maghreb Area

However, the EMA Maghreb Forum made clear, that a prospering Maghreb would not be achieved by increased German cooperation alone. Above all, the integration of the Maghreb area has to be strengthened. The possibilities for this were laid out and debated in different panels of the Forum. Closely connected to the idea of an integrated Maghreb is the Maghreb Union (Union du Maghreb Arabe). The Union was founded in February 1989 to promote economic cooperation but quickly found itself in a deadlock due to different political opinions. In the course of the current upheaval it was hoped, that this blockade could end and the Union could be revitalized. The Maghreb Union was also intend to take part in the EMA-Forum but had to decline the invitation to join shortly before the launching of the conference. Sadly, the absence of the Union cast doubts, if it has the ability to overcome its lethargy in the near future.

Some participants from the region used the Forum to outline new alternatives to the Maghreb Union. The president of the Union des Jeunes Euro-Maghrébins (UJEM), Abdessamad Filali, presented his organization, which is a voice for human rights and pluralism and aims at the peaceful integration of the Maghreb. Furthermore, the general secretary of the union Marocaine du Travail, al-Miloudi al-Mokharek, explained the program of his association which seeks to promote the dialogue between employees in all of the Maghreb countries in order to support closer cooperation. Thus, hope remains, that the strengthening of economic, political and social and cultural cooperation in the Maghreb itself will lead to a more stable and prosperous region.

The Maghreb Forum fostered the awareness that not only the Maghreb itself has an interest in cooperation but also that Germany can profit from a close economic integration.  By its interdisciplinary and trans-regional character the EMA-Forum could lay an important foundation for a deepening of German-Maghreb cooperation. In this spirit, the Forum was used to sign cooperation agreements between EMA and three partners from the Maghreb – the Union des Jeunes Euro-Maghrébins (UJEM), the Moroccan Chamber of Commerce and Industry in Casablanca and the Algerian Chamber of Commerce and Industry in Seybouse. EMA will initiate regional and trans-regional projects together with these and other partners and strengthen its appeal as a cultural intermediary and a competent partner for economic cooperation.