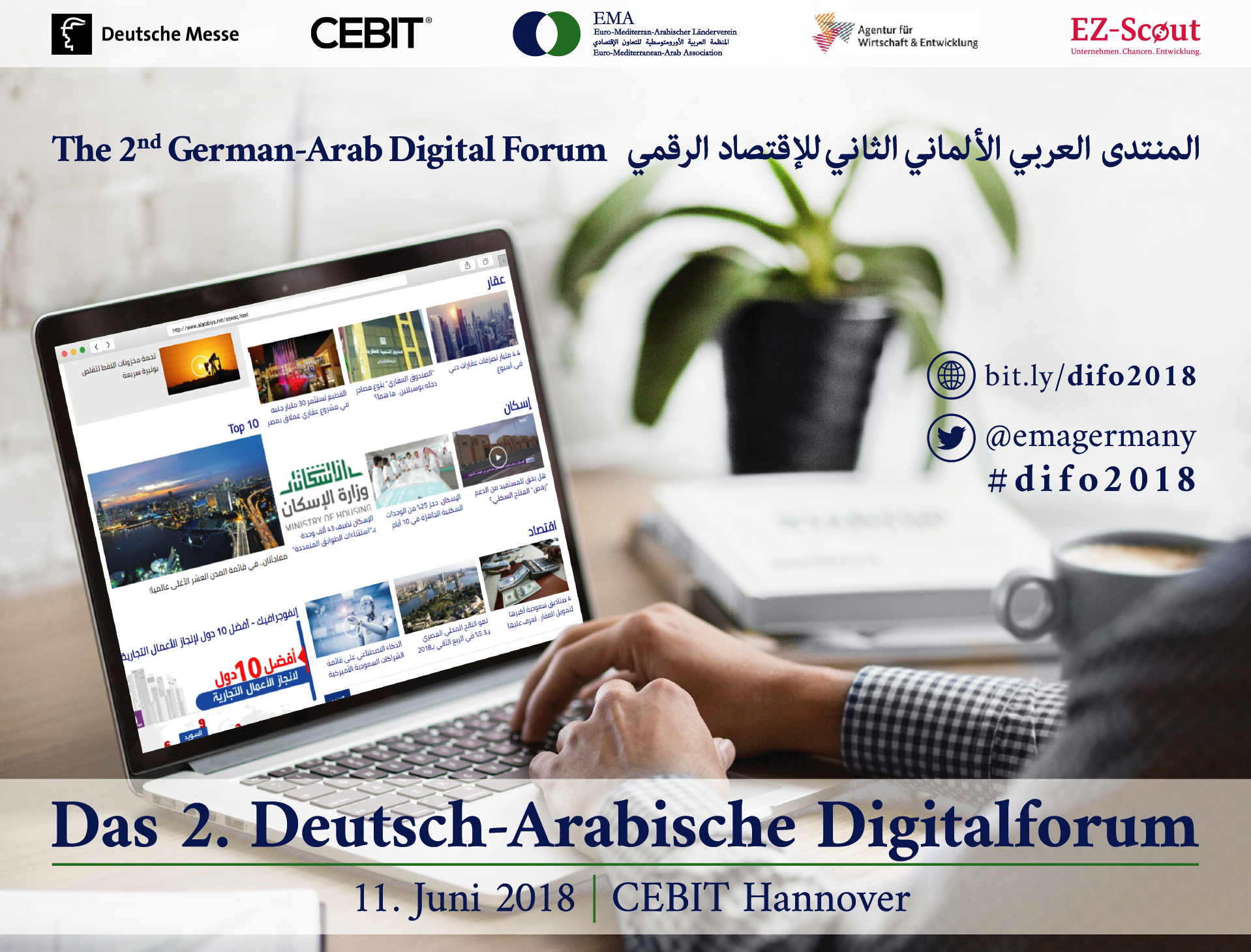 What are the market and business opportunities offered by the digitalization in North Africa and the Middle East region? Which digital solutions could close supply gaps? And how does the expansion of the IT sector strengthen employment opportunities in the Arab countries? You can discuss these and other questions with high-ranking decision-makers from the ICT economy at the 2nd German-Arab Digital Forum at the CEBIT in Hannover, Germany, on Monday, June 11, 2018.

“Certainly the caliber and the quality of the people that this forum has attracted is remarkable. Be it the former president of Germany or the current secretary of state from the federal ministry. Also, many colleagues I met who are working in the ICT sector from either the private sector or agencies affiliated with the government, they form a vibrant group of people and I’m quite impressed and I look forward to continuing the engagement.”

“I’m positively impressed by this forum. I’m completely convinced that digitalization brings about great opportunities for the region and that, as many speakers have highlighted, now is the moment to ask how. How we can partner in order to achieve these goals and how we will have better digital and financial inclusion. Therefore, this is the perfect networking opportunity.”

After finishing his Bachelor in Political Science & Administration and graduating with a Master in International Relations from Martin Luther Universität Halle/Wittenberg, Sebastian Kliem joined VOICE e.V. – Federal Association of IT Users in 2016. VOICE brings together IT and digital business decision-makers of leading companies of all sizes and sectors and offers its members a competent, attractive, and dynamic knowledge exchange platform. Mr. Kliem has been the contact person of VOICE’s Special Interest Groups since the beginning of 2019.

“We can create high added values from Arab countries. This is how ICT can bridge the gap. Germany can help by connecting businesses. Even German SMEs could build business bridges between the Tunisian, the African, and the German ecosystems, which would be of great value to our economy and for our businesses. […] This forum was constructive, insightful, and good.”

“I think Jordan – because of its geographic location amongst turbulent countries such as Iraq and the influx of refugees – faces a lot of challenges, but this means that we have a lot of opportunities as well. Especially for start-ups that require innovation. I think Germany and Jordan can really continue to work together to dissolve a lot of issues and make things better for the situation of Jordan. We have an initiative called “Reach 2025″ that aims at making Jordan a digital economy. […] In this sense, I’m very impressed by this forum. I’m meeting new people and learning a lot. It’s a good opportunity to be here.”

Investment in the future: ICT Economy in the Arab Region

Globalization and digitization – both trends hold great opportunities and enfold big potentials, along with being connected with issues like data security and jobs. This was also emphasized by Christian Wulff, former German Federal President and Honorary President of the EMA, at the 2nd German-Arab Digital Forum. The event was hosted by the EMA, the EZ Scout Program, the AWE and the CEBIT on June 11, 2018 in Hanover as part of the take-off Mondays at the CEBIT fair. “Digitalization is a cross-border issue especially involving three regions – Europe, North Africa and the Middle East – that are geographically and historically very close,” he affirmed. He also emphasized the importance of bringing together German and Arab decision-makers as well as businessmen, policy-makers and exponents of the science world. We shall all direct our attention towards international cooperation.

Digitalization as a tool to achieve the Sustainable Development Goals SDGs

“By bridging the technology gap that exists between industrialized countries and developing countries, we have to ensure that no one is left behind” – noted Dr. Bilel Jamoussi, Chair of the Study Groups Department of ITU-T. The International Telecommunication Union (ITU) is a specialized agency of the United Nations which, through a variety of projects in the Arab region and a special attention for vulnerable populations, helps them developing information and telecommunications technology. They operate in the belief that Artificial Intelligence can serve as a tool for the achievement of the Sustainable Development Goals. Another focus of the ITU is to Bridge the Standardization Gap (BSG), which aims to better integrate companies from the Arab region into the international ICT market. Thus, Arab participation in the ITU-T SG20 was consolidated in an SME pilot project with the participation of one Tunisian and three Egyptian companies and entailed the organization of conferences in Dubai and Tunisia.

Equally, the Federal Ministry for Economic Cooperation and Development (BMZ) wants opportunities which result from digitalization to be available to all. Therefore, the BMZ network, companies and associations established the tech entrepreneurship initiative Make-It in Africa and the strategic partnership Digital Africa. The Parliamentary State Secretary of the BMZ, Dr. Maria Flachsbarth, emphasized the countless benefits of digitalization for developing countries. However, much remains to be done: as more people can share their knowledge, more jobs can be created.

As part of a moderated dialogue, the Parliamentary State Secretary Dr. Maria Flachsbarth and Rym Jarou, CEO of Smart Tunisia, discussed the necessary framework for a job-creating ICT sector and tech entrepreneurship. Smart Tunisia, a program initiated by the Tunisian Ministry, seeks to promote Tunisia as an IT and Offshoring Hub and supports the establishment of new businesses. In order to create the necessary conditions to achieve this goal, Tunisia developed the Startup Act, following a two-year process which included legislators, companies, investors and the civil society. The program, which could play a pioneer role in Africa, allows prospective entrepreneurs to leave their job for one year, regardless of whether they work in the private or public sector.

Nidal Bitar, CEO of the Jordanian ICT association Int@J, offered a detailed insight on the relevance of the ICT sector for the Arab economy. Bitar, who is also organizing the MENA ICT Forum in Amman, explained that software developments and IT hardware make almost 40% of Jordan’s IT exports. Equally, women amount for on-third of employment in ICT, exceeding their share in any other sector. Thus, in 2014 and 2015 Jordan invested more than 400 million US Dollar in telecommunications and developed attractive conditions to support the sector: The government reduced the VAT on goods and services produced in the ICT sector from 16% to zero and lowered interest rates for investing in IT companies from 14% to 5%. Several German-Jordanien success stories such as DocuWare Europe GmbH and ITEC show how markets in the Middle East region can be opened up.

Innovations in the fields of e-health, e-education, e-agriculture, mobile money or smart cities can be more than just practical apps for industrialized countries. Increasingly, they also provide access to public services for demographic groups which previously lacked access.  Julia Nietsch from the French company Orange International presented one example for talking about her companies work as one of the leading providers of telecommunication services in the Arab region. By cooperating with local entrepreneurs and setting up innovation labs, Orange supports the development of applications which are tailored to local needs. In addition to this, Dr. Bilel Jamoussi from the ITU explained how feeding climate data into Smart City applications allows insuring farmers against crop failure. As CEO of the financial service provider Dinarak from Jordan, Imed Aloyoun also introduced his mobile wallet, an applications which can be used for payments, withdrawals or money transfers, without owning a bank account. In cooperation with Deutsche Gesellschaft für Internationale Zusammenarbeit (GIZ), Dinarak also set up the project Digi#ances Partnership Initiative to support the financial inclusion of people with low income from Jordan, Syria or refugees– often lacking a bank account.

The ICT sector as job creator?

As part of a lively discussion, the panellists debated whether increasing digitalisation and the development of the ICT sector creates jobs or rather destroys them.  This discussion was of particular importance for the Arab region, given their high rates of youth unemployment especially amongst university graduates which results in high hopes for the ICT sector to ensure economic diversification. In this context, Michael Pittelkow from SAP, Germany’s leading company for software development stressed the risk of treating the ICT sector as a silver bullet for unemployment. According to him, while there is no doubt that the emergence of an ICT sector creates new jobs, it inevitable leads to the loss of others. However, Julia Nietsch from Orange Inetrnational sees the effect on job opportunities as predominantly positive. According to her, studies have shown that the growing ICT economy has a positive impact on the development of the Arab region. “We have to promote both start-ups and medium-sized companies, since the latter creates the majority of the jobs.” This implies that truly sustainable development can only be achieved by cooperating with companies and universities that are already on site. While Clara Gruitrooy, Secretary General of the EMA, stressed the opportunities for female entrepreneurs in the ICT sector, Smart Tunisia’s Rym Jarou also mentioned the great potential for the labour market she sees as a result of digitalisation, yet also stressed the risk of expectations to be exaggerated.

Another topic of the discussion was the protection of personal data. All panellists agreed upon the fact that access to large amounts of user data, collected through applications, constitutes the fundamental requirement for digital innovation. The speakers agreed that in order to ensure responsible handling, it is crucial to ensure data anonymisation. “We need a balance between efficiency resulting from digitalisation and privacy which has to be subject to the highest level of protection, “ noted Michael Pittelkow. Using the example of France, Julia Nietsch emphasized that strict policies on data protection can create an important framework, facilitating these efforts. Since the ICT economy in France adapted to the country’s rules and regulations by creating strong algorithms to work with highly anonymised data, companies are able to protect the data privacy of their customers.

The 2nd German-Arab Digital Forum which took place at CEBIT, the European business festival for innovation and digitalisation, welcomed a broad range of high-ranking representatives from the digital industry of Germany and the Arab region. The forum allowed for a lively exchange and created a platform to establish new contacts.

In regard to the challenges and – as emphasized in this forum – most importantly the potential resulting from globalisation, the EMA provided an important contribution to promoting the ICT industry by bringing together decision-makers from business and politics. A cornerstone of sustainable digitalization worldwide.

Evelin Ayadi-Krenzer (ez-scout@ema-germany.org), GIZ’s EZ-Scout on behalf of the BMZ and seconded to the EMA, supports companies for development cooperation in the Arab region.