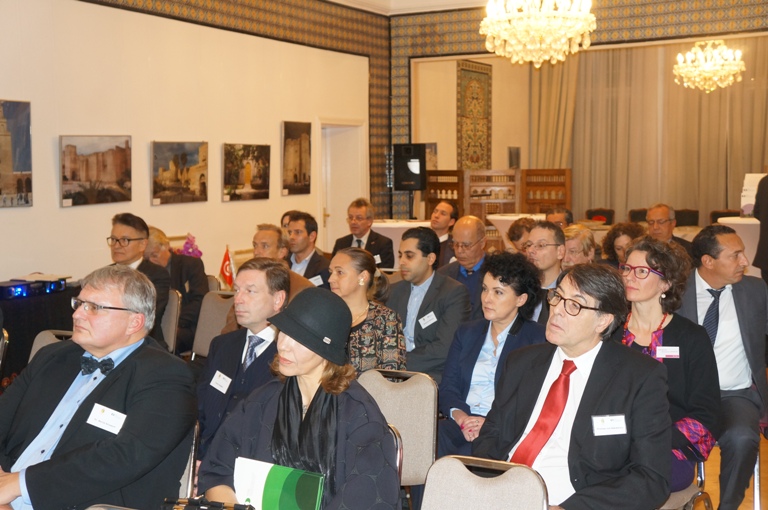 In preparation for the 2nd German-Tunisian Business Forum, EMA together with the Tunisian Embassy invited to the “Salon Diplomatique Tunisia”. About 40 participants, significantly more than expected, found themselves in the Embassy.

The event was opened by the guest host, H.E. Elyes Kasri, who welcomed the organization of the business forum and spoke about the long-standing German-Tunisian relations. He also referred to the recent inaugural visit of Tunisian Prime Minister Habib Essid to Berlin, during which he also received EMA President Christian Wulff. Furthermore, the ambassador spoke about past and present developments in Tunisia, as well as future reforms. One reform project worth mentioning is the restructuring of public-private partnerships, which allows foreign investment in large-scale projects.

Afterwards, EMA Secretary General Dr. Abdelmajid Layadi reiterated EMA’s will to contribute to global development. It is about “much more than just business” and the goal of EMA and the 2nd German-Tunisian Business Forum is to “take responsibility” and to “improve the already optimal conditions on the ground”.

Manhel Sebai from the Tunisian investment agency “FIPA Tunisia” presented the location advantages and investment opportunities in Tunisia. He discussed various sectors – from the electronics industry to energy and agriculture – in which foreign companies are already operating successfully. Mr. Sebai also highlighted Tunisian reforms and stressed that ” we have done a lot and a lot will be done in the future”.

Finally, EMA Managing Director Clara Gruitrooy reported on EMA’s work in Tunisia and presented the program of the 2nd German-Tunisian Business Forum to the audience. During the Q&A session that followed, the former German Ambassador to Tunisia praised EMA for organizing the Business Forum and called on the guests to “go to Tunisia and take the chance!”.