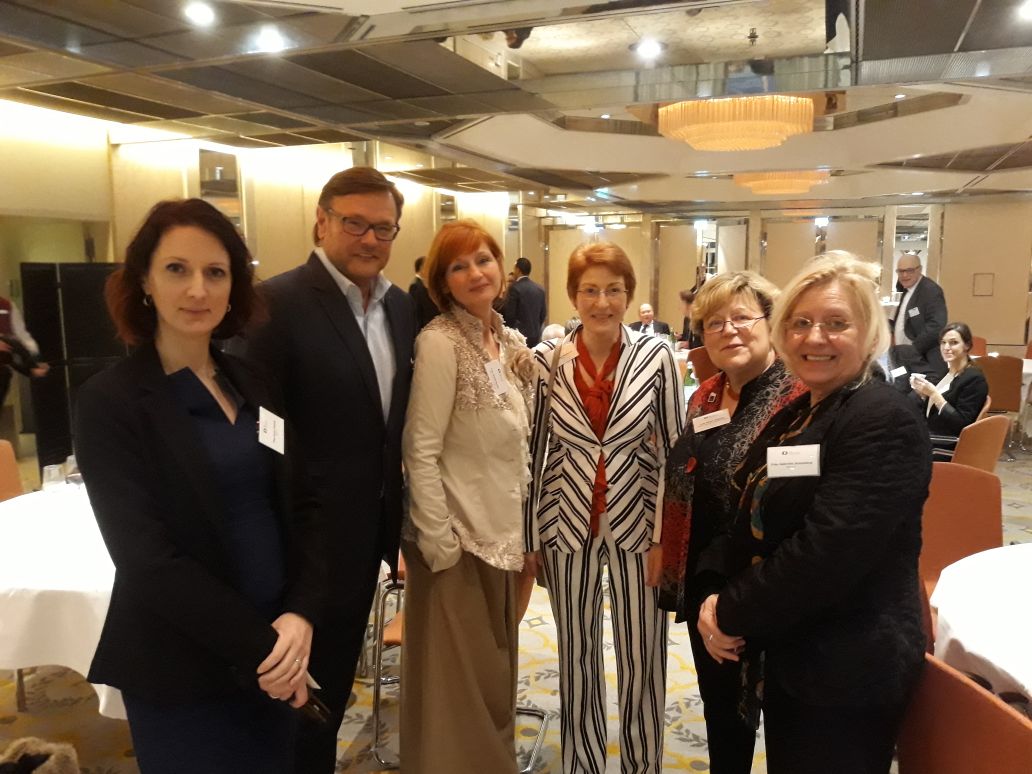 The work of EMA – more important than ever!

Members and selected guests from companies and associations, politics, diplomacy and science came from Germany and abroad to celebrate its tenth anniversary together with the EMA in Berlin. The speakers congratulated EMA on the occasion of the reception in the house of the host Commerzbank at Pariser Platz for its work, which is more important today than ever before and has achieved many successes despite all difficulties.

In all reforms and measures, the people were at the forefront; they were the ones who had to see personal benefits as a result of the political process. The former Federal President emphasized the need for cooperation: “Dialogue is worthwhile. Cooperation pays off. Not only between Europe and the countries of the Mediterranean and Middle East region, but also between the Arab countries themselves.

The EMA as a pioneer

Dr. Gerd Müller, Federal Minister for Economic Cooperation and Development, congratulated EMA in writing in the anniversary issue of the business magazine Mediterranes, which was published on the evening of the ceremony, as a pioneer in its field: “For ten years now, it has been bringing together people who have something to say and decide; across national borders and sectors. Sharing and exchanging knowledge, between Europe and the Mediterranean and Middle East regions, between business, politics and science: that’s important! This is why the German government supports many of their projects. The entire issue can be read here.

The Arabian guest of honor of the evening, H.E. Dr. Hazim El-Naser, Jordan’s former Minister of Water and Irrigation, welcomed the invited guests on behalf of EMA Honorary President Prince Hassan bin Talal of Jordan, whom he personally represented at the ceremony for EMA’s 10th anniversary. In his written greeting, His Royal Highness emphasized: “EMA has proven to be an excellent platform for mutual exchange and an independent and reliable partner for the Mediterranean and Middle East region”.

Dr. El-Naser praised the good work of EMA and its impact into the countries of the Mediterranean and Middle East region and especially emphasized the aspect of sustainability, which EMA cultivates like few others. He himself already knows EMA from the 3rd German-Arab Water Forum 2015 and expressed his confidence that the 3rd German-Arab Environmental Forum 2019 in Jordan will also be a success.

As a member of the jury for the CSR Award 2018, which the EMA presented at the ceremony, Dr. El-Naser also took the opportunity to emphasize the importance of Corporate Social Responsibility (CSR) between companies in Germany and the countries of the Mediterranean and Middle East region. Sustainable corporate governance and sustainable business practices are not limited to environmental and climate protection, but also include social responsibility, the development of a knowledge-based society and the strengthening of gender equality, training and qualification measures, and gender justice. The EMA has already adopted all of these aspects as its own and is now awarding the CSR Prize to corresponding cross-border projects.

EMA Secretary General Clara Gruitrooy emphasized the innovative power of the country association: “EMA wants to continue to provide new impulses in the next ten years and actively shape German-Arab cooperation. We have recognized the importance of CSR.

And EMA President Gabriele Groneberg, MdB a.D., also sees the potential of EMA becoming even greater in the future: “EMA takes care of small businesses and medium-sized companies, hidden champions and global players throughout Germany and beyond. It has the resilient network and the expertise to positively influence the economy, politics, science and civil society in the countries of the Mediterranean and Middle East region.

The mission of the EMA is today more topical than ever. In essence, EMA strengthens the Mediterranean and Middle East region through sustainable economic cooperation. The creation of perspectives for mutual benefit is the main focus of its activities. In lighthouse projects such as the award-winning mentoring program Ouissal for the economic participation of women or the still young German-Moroccan chamber and association partnership project Connect Achat, economic and structural development go hand in hand; Ouissal is further enriched by the empowerment of women, which EMA has also distinguished for many years.

The speeches were framed by the music of the Syrian-born oud player Marwan Alkarjousli, who created an oriental atmosphere with his own compositions and a piece from Damascus. After the thought-provoking speeches, there was room for reflection. At the subsequent reception with buffet, the guests enjoyed stimulating discussions at the foot of the Brandenburg Gate and agreed: EMA will remain at least as dynamic in the coming ten years and make a considerable contribution to Euro-Mediterranean-Arab cooperation.