HomeEventsBusiness DelegationsThe Kingdom of Bahrain and the United Arab Emirates

The Kingdom of Bahrain and the United Arab Emirates 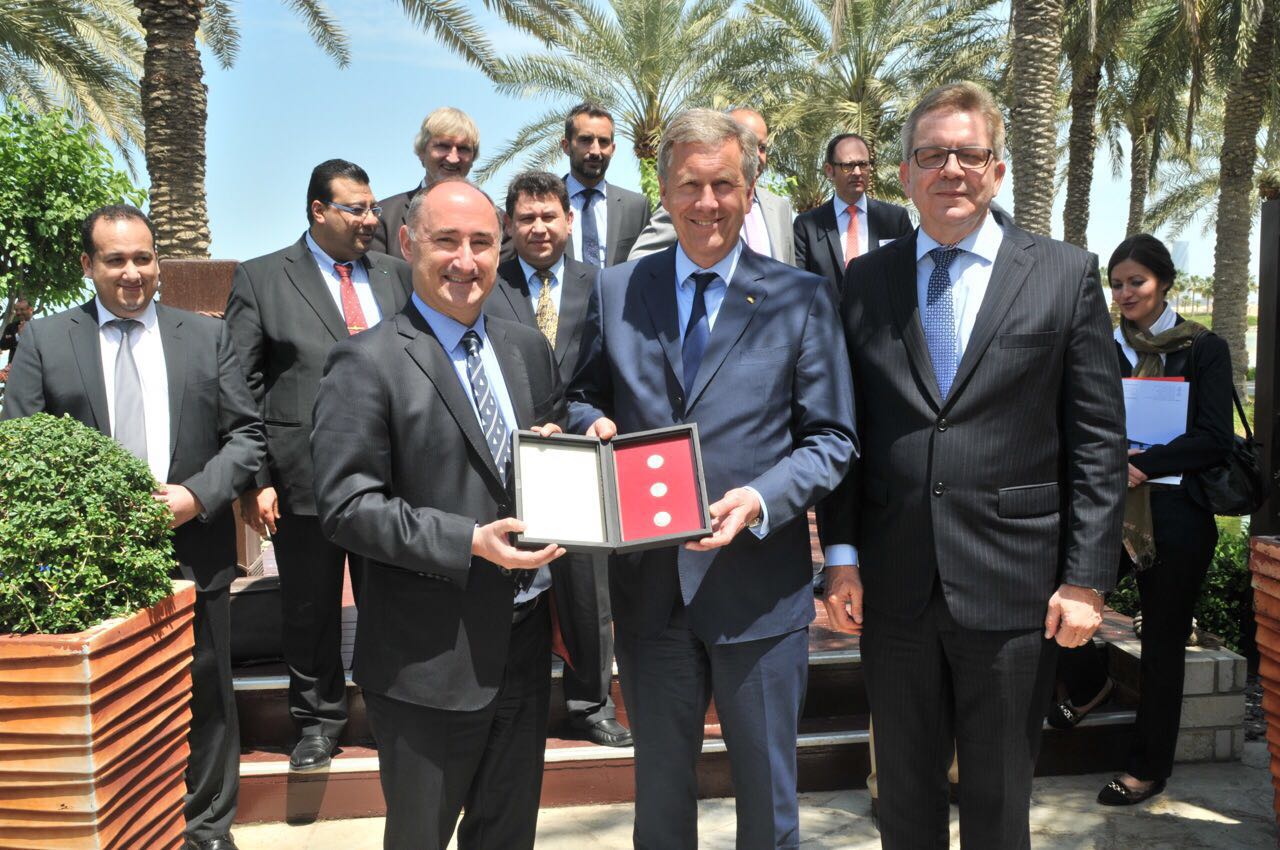 Ambition, vision and the drive for innovation characterize the Arab Gulf states. The United Arab Emirates and the Kingdom of Bahrain in particular are considered pioneers within the Gulf Cooperation Council in their efforts to diversify the economy. Together they lead the regional ranking of the Index of Economic Freedom and attract international investors with excellent location conditions. German know-how is particularly welcome here.

With this in mind, EMA and its partners are pleased to invite you to participate in the following event:

to the Kingdom of Bahrain & the United Arab Emirates

with the President of the EMA, former German President Christian Wulff.

The United Arab Emirates is Germany’s most important sales market and second most important trading partner in the Arab region. They are one of the world’s financially strongest states; this is reflected, among other things, in a per capita income of around 43,000 USD as well as the stable growth rates and positive forecasts. Economic diversification reforms have established the infrastructure, financial services, tourism and renewable energy sectors as successful business areas.

With its Economic Vision 2030, the island nation of Bahrain has also been able to drive sustainable and multifaceted economic restructuring. Infrastructure, logistics, financial services and aluminum production are among the key industries here. In particular, the geographic location with its good infrastructural links to Europe, Asia and Africa, as well as the tax waiver for private companies, the free movement of capital and the guarantee of 100 percent ownership rights for real estate and company assets for foreign investors are leading to the country’s increasing attractiveness. The first results of economic development can already be seen, for example, in the doubling of GDP per capita, which rose from US$13590 in 2000 to US$24855 in 2014.

Together with its partners, among others the Bahrain Economic Development Board and the Talal Abu-Ghazaleh Organization, EMA now offers you the ideal platform to use its extensive networks for your projects and to establish excellent contacts for your successful business initiations.

After the delegation trip to the Kingdom of Bahrain and the United Arab Emirates (UAE), the participants who went along are very satisfied. Even pronounced connoisseurs of the region such as Prof. Ingmar Grambow, Managing Director of Ritz Instrument Transformer GmbH, say they have gained new impetus from the trip to the Arabian Gulf: “I’m coming back right away with concrete ideas for several projects. And of course, it will be helpful that we got to know the key people on site right away.”

For four days, from April 3 to 6, the EMA was on the road with a delegation of business companies: in Bahrain and the United Arab Emirates, the delegation met with ministers, diplomats, business people and economic organizations and received field reports from German companies on the ground. Especially in the Arab world, personal contacts are often the key to success; the multifaceted encounters laid the foundation for this.

Viola Klein, Managing Director of the software company Saxonia Systems Holdings GmbH, particularly emphasizes the personal experience gained from the trip: “Getting to know the decision-makers on site, examining concrete projects and exchanging ideas with companies that are already established in the country is quite different from reading a country report or being informed about third parties. I really feel like I’ve gained important insights.”

Ministries, diplomats and entrepreneurs: the delegation’s visit was also a special event for the hosts

In Bahrain, the delegation met with German Ambassador Alfred Simms-Protz and Bahraini Minister of Industry, Trade and Tourism Zayed al-Zayani, among others. The participants also spoke with leading representatives of those organizations – such as the state-run Bahrain Economic Development Board (EDB) – that plan and promote Bahrain’s economic development. The round of talks with Tamkeen, an organization that helps companies set up in Bahrain and qualifies Bahraini workers to work for international companies, proved to be particularly enlightening. The delegation’s visit was also a special event for the Bahraini side – because although Bahrain has now established itself as a business location, official visits from the German side are rather rare.

The main focus of the visit to the United Arab Emirates was the Business Diplomacy Forum organized especially for the delegation with the Abu Dhabi Chamber of Commerce and Industry (ADC) and the Talal Abu-Ghazaleh Organization (TAG-Org). The conference was attended, among others, by European ambassadors (including the representative of the EU in the Emirates, Patrizio Fondi), diplomatic envoys from the EMA region, and numerous ADC board members. The fact that so many high-ranking interlocutors took part in the meeting shows that the delegation and the expansion of German-Emirati relations met with great interest.

Christian Wulff, President of the EMA, promoted the involvement of German companies in the Gulf region, which – located between Europe, Asia and Africa – is increasingly becoming a center of the global economy. Due to its centrality and stability, the UAE is also becoming an increasingly important partner for Germany in the world. For this reason, Wulff said, cooperation between Germany and the Emirates must be expanded – especially when it comes to investing in environmental technologies, an area in which Germany has a leading role.

That is why – as the trip also clearly showed – the region is particularly interesting for small and medium-sized companies that can gather a high level of expertise and offer innovative solutions. EMA supports these companies with its broad network of local partners and advises them on decisions regarding the Mediterranean and Middle East region.

Abu-Ghazaleh : We are Proud of TAG-Org’s Strategic Partnership with the Euro-Mediterranean-Arab Association.