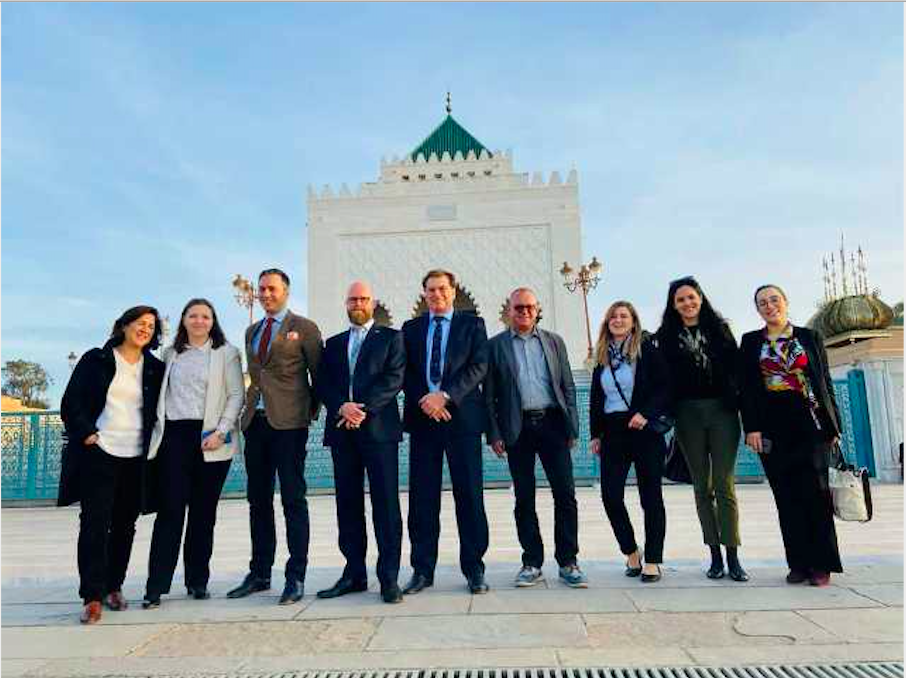 In cooperation with the Afrika-Verein Veranstaltungs-GmbH, the Euro-Mediterranean-Arab Country Association EMA e.V. and the German Business Center (GBC) Casablanca are conducting a business initiation trip to Morocco for German small and medium-sized enterprises (SMEs) on behalf of the German Federal Ministry for Economic Affairs and Energy (BMWi) from January 27 to 31, 2020. This is a project-related funding measure. It is part of the export initiative “Civil Security Technologies and Services”, which is carried out within the framework of the BMWi market development program for SMEs.

Morocco’s economy is growing steadily and many new, interesting projects are emerging. For 2019, the World Bank expects an estimated economic growth of 2.9 percent, which is down 0.2 percent compared to 2018. However, reforms in the Moroccan economy are forecasting stronger growth again in the coming years. Currently, the planned expansion of the port in Casablanca and the enlargement of the Port of Tangier Med in particular offer prospects in the field of civil security technologies and services. In addition, further major construction projects are planned or already under construction.

The aim of the trip is to arrange contact meetings for the German participants with previously identified individual business partners. Prior to the trip, the participants will receive industry-specific information on the target market and potential business partners. Within the framework of a conference, the German participants present their products and services or fields of cooperation to a local audience interested in the subject. Project and company visits complete the program.

The registration deadline is October 4, 2019, and the number of participants is limited to 12. Registrations will be considered in the order of receipt, SMEs have priority over large companies.

The personal contribution for participation is between 500 and 1,000 euros net, depending on the size of the company, plus individual travel, accommodation and catering costs. In addition, individual services will be certified for all participants in application of the EU’s de minimis regulation. The general terms and conditions of the trip can be found here.

An overview of further projects of the BMWi market development program for SMEs can be found at www.ixpos.de/markterschliessung.

Why invest in Morocco? This question was answered by a five-day delegation trip for German companies from the civil security technologies and services sector from January 27-31, 2020 in Casablanca, Rabat and Tangier. The civil security market is an essential part of Morocco’s national strategy. During the mission, the participants were able to constantly see for themselves the advantages and modern infrastructure of Morocco and had numerous discussions with more than 40 interested relevant companies. The delegation was led by EMA in cooperation with the Africa Association and the German Business Center GBC within the framework of the market development program of the German Federal Ministry for Economic Affairs and Energy (BMWi).

Casablanca, the center for civil security

With the participation of more than 40 Moroccan public and private organizations, including the OCP Group and the Office National de l’Electricité et de l’Eau potable (ONEE), the first day of the conference became a platform for debates and exchange of experiences and expertise in the field of civil security services and technologies between Moroccan and German entrepreneurs.

Mr. Yassine Ahyani, representative of the Agence Marocaine de Développement des Investissements et des Exportations (AMDIE), highlighted the favorable investment environment and stressed that the Kingdom of Morocco offers favorable deals for local and foreign investors. His speech was followed by an insightful presentation by Mr. Moncef Moumni, CEO of the Moroccan company Omni Security Systems. He has more than 20 years of experience in the civil security sector and introduced the Moroccan market, outlined its development and presented his perspective as a Moroccan expert on how to find the right partner in this market.

The conference was also a platform for exchange between the German delegation on the one hand, who presented their products and services to the Moroccan public, and Moroccan companies on the other hand. In presentations by Bureau Veritas as well as through a workshop led by Mr. Mehdi P. Meurger, expert in security, the German delegation was introduced to the investment process as well as certification opportunities and the specificities of the Moroccan market.

Rabat, the administrative heart of the Kingdom of Morocco

Why invest in Morocco? During a one-hour briefing, the German Embassy in Morocco explained the Moroccan economy and investment environment, as well as the economic and political situation, and also addressed the challenges posed by the Moroccan market.

In Rabat, the meetings focused mainly on access to public markets and the needs of Moroccan public institutions. Exchanges took place with the Direction Nationale de la Sûreté Nationale, which reports to the Ministry of the Interior, and the Direction de la Stratégie, des Programmes, et de la Coordination des Transports of the Ministère de l’Equipement, du Transport et de la Logistique, et de l’Eau (Transport, Logistics and Water Supply). During these fruitful discussions, the delegation learned about the efforts made to ensure the security of the Moroccan territory, as well as the new technologies that can be used in case of emergency, through the presentation of the two directorates.

In addition, this day was also dedicated to B2B/B2G meetings held between Bank Al-Maghrib, Office National des Chemins de Fer (Railways), leading company Maghreb Net and members of the delegation. Both sides welcomed these talks, during which it was possible to illustrate the high quality of products and services offered by the German companies present.

Tangier, the gateway to Africa and Europe

From Rabat to Tangier, the journey continued on the new Al Boraq high-speed train. An unprecedented experience that once again demonstrated the Kingdom’s modern infrastructure. In cooperation with the regional investment center Centre Régional d’Investissement Tangier-Tétouan-Al Houceima (CRI TTA), headed by Mohamed Ghassen Bouhia, EMA presented the potential of the Tangier region. The TTA region is considered the center of economic growth par excellence and offers countless investment opportunities.

The visit to Agence Spéciale Tangier Med (TMSA) reinforced the development and forward-looking vision of the agency in particular and Morocco in general. State-of-the-art infrastructure and very attractive tax benefits made TMSA and its various fields of activity and platforms the focus of the delegation trip.

Tangier is the closest point to Europe; it is only fourteen kilometers from the European coast and has innovative technologies for monitoring maritime traffic. The Strait of Gibraltar is a high traffic density hub and is monitored by the Centre de Surveillance du Trafic Maritime. Tethys Naval, a leading German company for the development of maritime safety concepts, and Frequentis, the German market leader for safety-critical communication and information solutions, took the opportunity to present new German services and technologies.