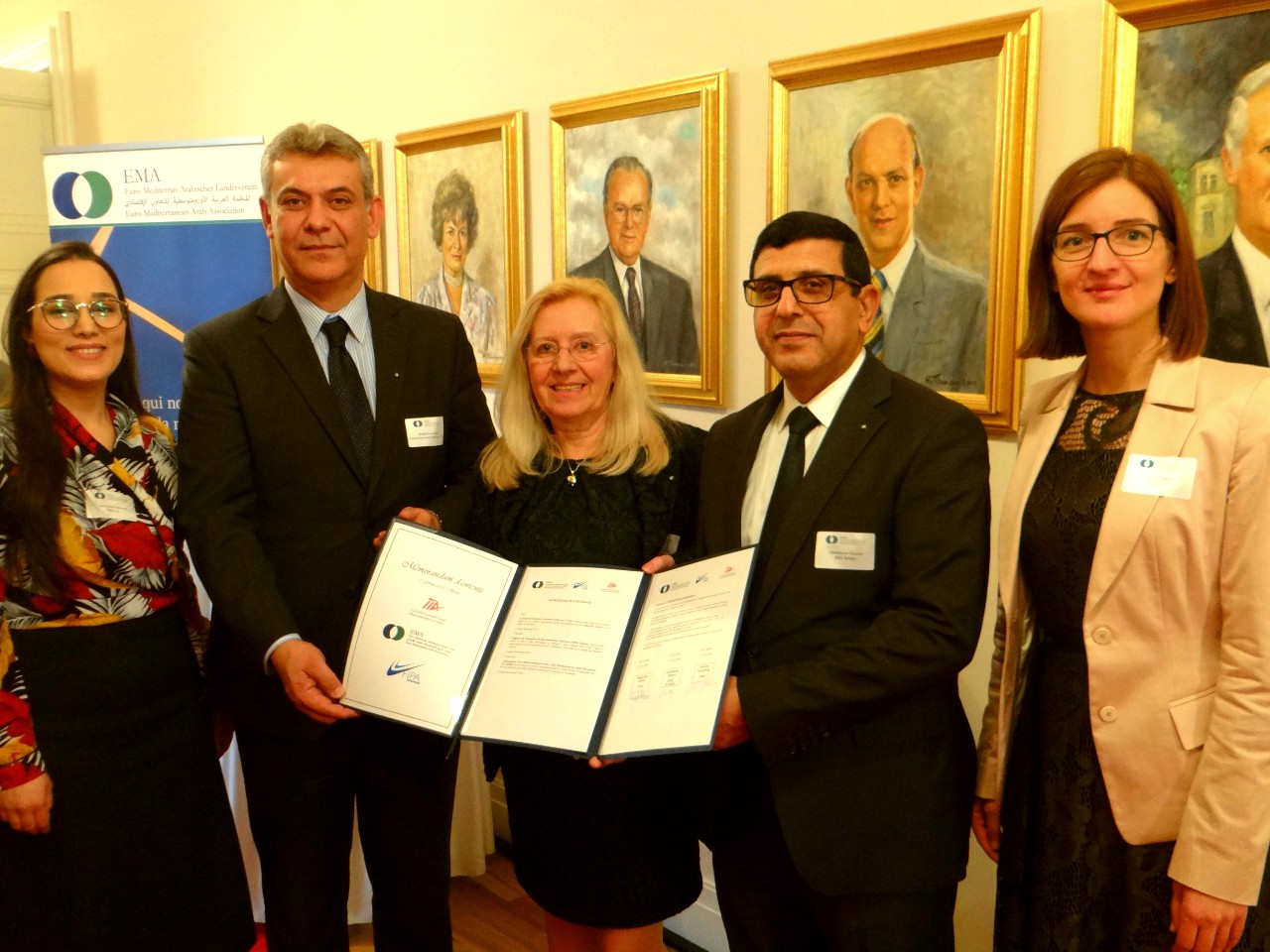 As part of its parliamentary New Year’s reception, the EMA signed a cooperation agreement with its partners Tunisia Investment Authority TIA and Foreign Investment Promotion Agency FIPA. The partners are planning several joint activities in Germany and Tunisia over the next few months. This is to increase the visibility of TIA and FIPA in Germany. In addition, they promote the exchange of know-how and expertise on topics in demand as well as information on the business and legal framework for investments in Tunisia.

“Together we are committed to a deeper cooperation between Tunisian and German actors and associations in order to learn from each other and to draw attention to the investment opportunities in Tunisia,” said guest of honor Gunther Beger, Head of the Department of Policy Issues, Economy, Trade and Rural Development at the Federal Ministry for economic cooperation and development (BMZ).

“Tunisia has great potential: Due to its geographical proximity to Europe, a comparatively good level of education and a well-developed infrastructure, it is an interesting production and business location for German and European companies,” continues Beger. Directly after the event, the first companies were able to convince themselves of this in a B2B conversation with representatives from TIA and FIPA.

With the Parliamentary New Year’s Reception, the EMA shows its cross-party connection with politics, the Bundestag, as well as with ministries, authorities, embassies and German and international organizations. More than 60 members of parliament, ministerial representatives and entrepreneurs filled the limited space in the premises of the German Parliamentary Society directly at the Reichstag building and used the opportunity to network with one another and with the Tunisian delegation at an exquisite German-Mediterranean lunch buffet.

In her welcoming address, EMA President Gabriele Groneberg, former member of the Bundestag, pointed out that economic relations between Germany and Tunisia have developed in favor of Tunisia over the past ten years. “Today Tunisia is one of the few Arab countries from which Germany purchases more goods and services than it delivers there.” Groneberg expressed her hope that “with Tunisia we are looking at a country that, after many ups and downs, represents an era which will hopefully be remembered in Tunisia as the Roaring Twenties. “

Other MPs also spoke spontaneously. Former MEP Eva Quistorp showed interest in economic projects for women in Tunisia, while MEP Karsten Möring referred to projects in the field of environmental technology and vocational training in Morocco.

Projects for women and digitization

With the German-Arab mentoring program Ouissal, the EMA has been present in both countries for many years and has built up a resilient network of women entrepreneurs. Other EMA cooperation projects focus on the areas of digitization and agriculture, where the focus is on the development and expansion of sustainable, future-oriented and internationally competitive structures as well as training and the creation of employment prospects.

To the applause of those present, SAP Africa Manager Michael Pittelkow reported that two thirds of the youngest graduate class of the SAP Young Professional Program were women. The Tunisian IT market is growing steadily, as is the expansion of the broadband and high-speed infrastructure. With the national strategy Tunisie Digitale 2018/2020 , the Tunisian government also wants to encourage private companies to invest and promote digital transformation.

The EMA has been strongly and reliably active in North Africa for many years, as shown by the success of the latest missions to Tunisia and Morocco  and the intensive, trusting cooperation with the governments and partner institutions in Germany and on site. The fact that the EMA is neutral helps it to open doors in all countries in the Mediterranean and Middle East regions that remain closed to others.