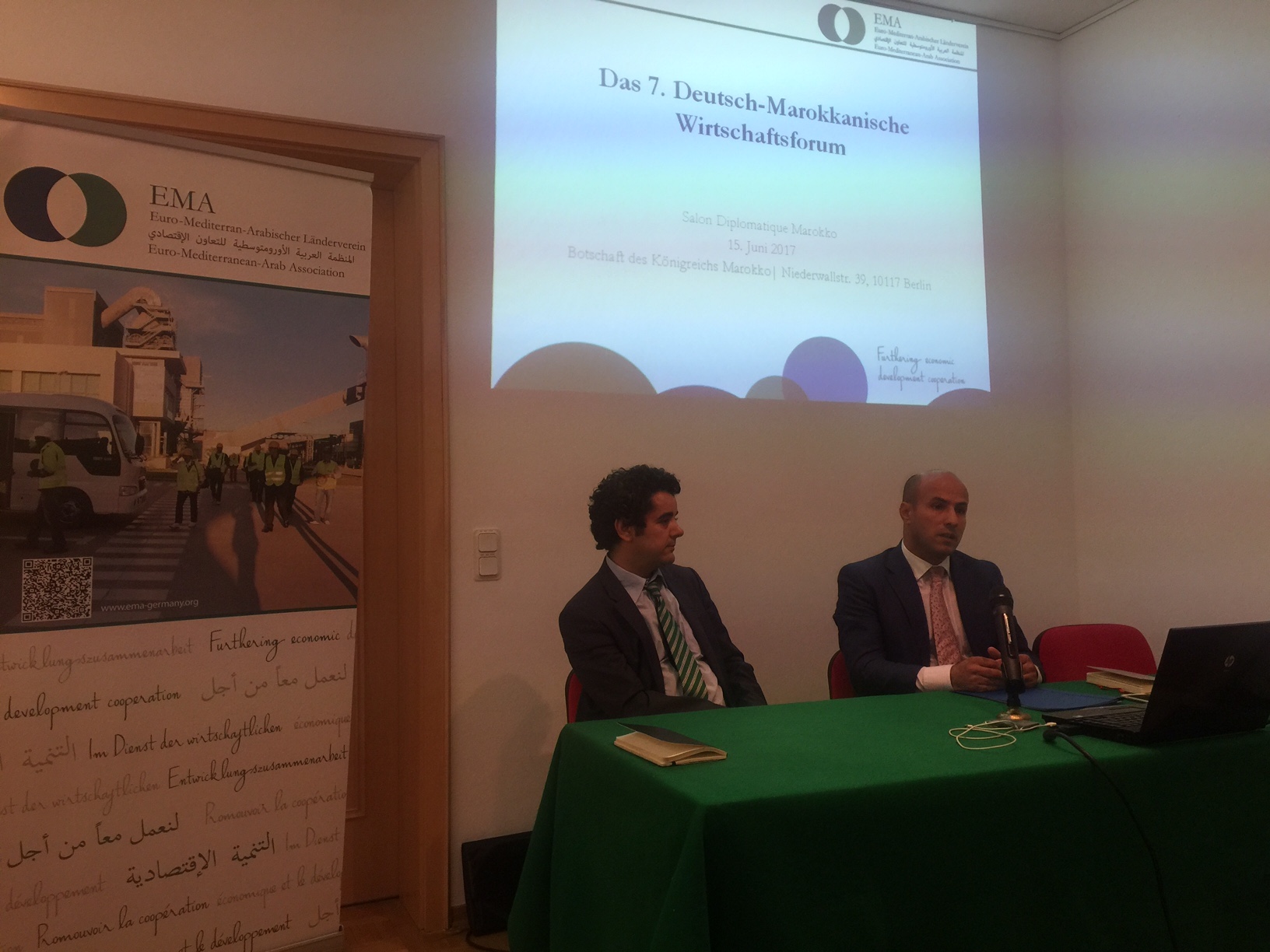 Together with the Embassy of the Kingdom of Morocco in Berlin, EMA cordially invites interested entrepreneurs:

Salon Diplomatique Morocco on the topic: How big is the Moroccan market really?

An event in the framework of the 7th German-Moroccan Business Forum with H.E. Omar Zniber, Ambassador of the Kingdom of Morocco to Germany

Embassy of the Kingdom of Morocco | Niederwallstraße 39, 10117 Berlin

The Kingdom’s economic concept, which aims to diversify the economy, offers foreign companies a wide range of investment and business opportunities. Locational advantages such as proximity to the main European market, modern transport and telecommunications structures and comparatively low production costs make the country highly attractive for investors. The kingdom between the Atlantic and the Mediterranean is further expanding its role as North Africa’s economic forerunner and benefits from political stability and steady economic growth.

The Salon Diplomatique Marokko offers participants and interested parties of the 7th German-Moroccan Business Forum the opportunity to obtain country-specific information in order to prepare themselves optimally for the delegation trip from 9 July to 12 July 2017.

The Ambassador of the Kingdom of Morocco, H.E. Omar Zniber, will inform you about the current economic and political developments in the country. Afterwards you will have the opportunity to exchange views on the general conditions and investment opportunities for German companies in Morocco.

We look forward to welcoming you to this event.

In preparation for the 7th German-Moroccan Business Forum, the Salon Diplomatique Marokko at the Embassy of the Kingdom of Morocco in Berlin on 15 June 2017 offered information on this year’s main topics as well as country-specific information on Morocco as a business location.

The opening speech by Moroccan envoy Khalid Lahsaini gave an insight into the many opportunities for foreign investors in Morocco thanks to the Kingdom’s far-reaching achievements in the financial sector, renewable energies or infrastructure development. The Africa Summit, which had just taken place in Berlin as part of the G20 Summit, had once again shown that Morocco was a key country for German-African relations.

This was followed by an informative contribution on German-Moroccan legal advice by the lawyer Oussama Al-Agi and a presentation by the office manager Roman Fürtig of the Bundestag member Jürgen Klimke’s commitment in Morocco in his function as chairman of the Committee on Economic Cooperation and Development, in particular as chairman of the German Society of Friends of Morocco.

Dr. Kerstin Hartsch, Head of the Office for Ecology and Environment at IPRO consult GmbH in Dresden, provided informative insights into the market entry in Morocco. From her many years of work experience in Morocco within the framework of environmental projects, Dr. Hartsch referred to the extremely good sectoral economic planning in Morocco and emphasised how much cooperation with strong local partners simplifies market entry.

Managing Director Clara Gruitrooy then presented this year’s programme of the German-Moroccan Business Forum as well as current EMA projects such as the German-Arab mentoring programme Ouissal.

The Salon diplomatique ended with a round of talks, which allowed open questions from the audience to be answered and the participants to exchange ideas.